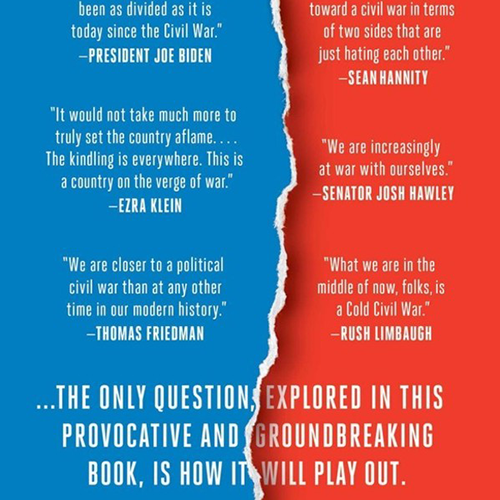 share
subscribe
https://lux-capital.webflow.io/ideas-blog/securities-by-lux-capital-american-civil-war-2-0-2
share and subscribe
https://lux-capital.webflow.io/ideas-blog/securities-by-lux-capital-american-civil-war-2-0-2
Danny Crichton
00:00
00:00
transcript
All our transcripts are made by human listeners and reviewed by our team for accuracy. Though we try hard to keep them error-free, there may be differences between the recorded audio and written transcripts. Please verify any statements in the audio before quoting in print.

Canadian writer Stephen Marche’s new book The Next Civil War was officially published last week, and it made quite a splash among those of us who read it at Lux.

Marche pulls no punches in his opening lines: “The United States is coming to an end. The question is how. Every government, every business, every person alive will be affected by the answer.” Rather than regale readers with the repetitive talking points that animate left- and right-wing partisans, Marche does something rather novel: he explores alternative incendiary scenarios that would lead to a cataclysm, including local takeovers of federal land, climate change, an assassination, and more.

While the book has several core messages and a constellation of fascinating facts, there are three meta-lessons worth pondering.

First, one theme that flows across these different scenarios is the gaping lack of trust and truth between Americans. Benedict Anderson famously described nations as “imagined communities” in his eponymous book, because no one in a country of 330 million people can meet — let alone know — everyone else. So in order to function as a nation, each American has to imagine who those other Americans are and connect with them through culture, or religion, or language, or institutions, or simply through our very borders.

Marche, borrowing from findings in political sociology, notes that “Typically, when democracies confront violent disruptions to the transition of power, they rely most heavily on their national symbols and collective rituals.” What happens when even basic questions like “who is in charge” can no longer be answered and a shared truth can’t be found? The answer, of course, is in the book’s title.

Second, and this is from Josh Wolfe, but the very discussion of civil war opens the Overton window for civil war, accelerating the narrative rather than stifling it. Indeed, one widely discussed recent poll showed that Americans of all political stripes are increasingly willing to consider violence “justified” for policy ends. Polls like this, discussions like this newsletter, and more make it ever more likely that non-democratic means will be used to effect political change. It’s the future-that-shall-not-be-named.

Third, and perhaps most tellingly about the state of American discourse, The Next Civil War will convince approximately zero of its readers to adjust their point of view on the trajectory of American politics. Readers are going to viscerally agree with some points, viscerally disagree with others, but it is hard to believe — even for a book that makes reasonably strenuous efforts to be non-partisan — that someone will walk away thinking anything differently. Which of course is the vicious intellectual cycle that led to the book being written in the first place.

Marche ends not with optimism, but with an anti-hope. “There is one hope, however, that must be rejected outright: the hope that everything will work out by itself, that America will bumble along into better times. It won’t. Americans have believed their country is an exception, a necessary nation. If history has shown us anything, it’s that the world doesn’t have any necessary nations.”

The way forward is clear, and it’s built into that theme of lux: it’s about enlightenment. Renewing values, renewing symbols, renewing a commitment to truth, and rebuilding institutions that have become antiquated in 2022. And doing that all quickly, since the trendlines aren’t going to be friendly to delays.

After that depressing news, time for some ❤️

In case you missed it, an absolutely huge milestone in the area of xenotransplantation: doctors at the University of Maryland Medical Center successfully — for the first time — transplanted a genetically-modified pig heart to a human patient, 57-year-old David Bennett.

One of the last in-depth stories I did for TechCrunch before showing up at Lux was a profile on UNOS, the United Network for Organ Sharing. Xenotransplantation offers one of the best near-to-medium-term opportunities to rapidly increase the supply of organs needed by humans, and this week’s milestone is a testament to decades of work by scientists and medical doctors to set the stage for this achievement.

While much more work is required to make xenotransplantation a safe and consistent procedure (no one wants to beta trial their heart, after all), this early sign of success should continue to bring attention and capital to the xenotransplantation market. There are still longer-term hopes for lab-grown organs, but those remain mostly in the realm of science fiction today.

A revolution in protein structure prediction

Forwarded to me by Adam Goulburn and Zavain Dar, Sriram Subramaniam, founder and CEO of Gandeeva and professor at the University of British Columbia, published a comprehensive overview of what is happening in structural biology in Nature Methods following the success of AlphaFold in 2018 and particularly 2020.

While sufficiently technical to frustrate a skim read while drinking a Santa Cruz grenache like I originally tried, the paper offers clear guidance on what is happening today with regards to protein structure prediction, and where new technologies like cryo-electron microscopy will take it in the next decade.

With AlphaFold and RoseTTAFold, we now have excellent tools for predicting the general structure of hundreds of thousands of proteins, a number that is rapidly increasing. That databank gives life scientists the means to develop computational models of biology and increase our understanding of how our cells work.

There are gaps though. While we can identify the standard formations of proteins given their underlying amino acids, we often don’t know how proteins change configuration when entering different states or interacting with each other. That’s where newer tools like cryo-EM come in handy. As Subramaniam writes:

Fortunately, several of the gaps in the predictions of these powerful new methods correspond almost exactly to the areas where cryo-EM can provide useful information. Cryo-EM methods based on ‘single-particle’ imaging enable the determination of 3D structures of macromolecular assemblies that are frozen by rapid vitrification in cryogens such as liquid ethane. The rapid freezing process allows the preservation of protein structures under near-native conditions. […] Visualizing multiple conformational and functional states that are populated in the samples by 3D classification is a unique strength of the cryo-EM toolbox.

This is an enormously important line of work, so do check out the paper(without the wine, of course).

From our scientist-in-residence Sam Arbesman, a great editorial published in Nature calling for the funding of “focused research organizations” that would bridge the gap between academic science and venture-backable startups:

A type of non-profit start-up could be a better way to support projects that enable research. These would have full-time scientists, engineers and executives, and total funding of about US$20 million to $100 million that would last around 5 years — longer than most grants or venture-capital funding rounds allow. And they would be set up to pursue predefined milestones, such as improving the resolution of a measurement system by tenfold, or gathering a pre-specified amount of data. We call them focused research organizations (FROs).

The Renaissance Man of Venture Capital

Most of you reading this presumably know Lux, but this profile by Michelle Celarier in Institutional Investor offers a vivid window into how Josh Wolfe, Peter Hébert and the whole Lux crew here think about the world of venture today.

There is a great segment toward the end on Josh’s thoughts around smelly startups:

“Sight, as an extension of our human senses, is technologically capturable and replayable,” he says. “Sound, same thing. I can record a sound. And then you can play that back.” Taking it one step further, he mentions the app Shazam. “I’m in a coffee shop or a restaurant or a hotel, and I like a song, and I press Shazam and I hold it up, and the sound of that song goes into my little pocket computer, and decodes the waveform and tells me exactly what song that is by the artist.”

So why, he wonders, can’t people do that with smells? “Sound is just a waveform that’s traveling through the ether — I can’t even see it, and I have a piece of technology that can capture, invisibly, sound, and play it back,” he says. “A smell is just a volatile organic compound. When you have a candle, or you have chocolate, or you have food, or you have wine, or you have a shampoo, or the smell of your grandparents, or a home, there’s a distinct smell.”

An Apple a day keeps China at bay

Finally, SupChina posted a combination podcast and transcript of Chris Marquis’s conversation with former Apple University China head Doug Guthrie. Apple is deeply entwined with China economically and industrially, and some of the more esoteric lessons about that arrangement are absolutely fascinating to read (or listen to). Here’s Guthrie:

And what happens then is just with any company, whether it’s electronics or automobiles, you have components, modules, and final assembly. Right? Most people think like, “Oh, Tesla, they have a factory in China. Its final assembly.” No, actually it’s components, modules, final assembly. And in every one of those levels, the companies that are the most innovative are helping to teach the suppliers how to run their supply chains, and they always teach multiple suppliers. And so what happens is that the suppliers become competitors against each other.

And so I can just tell you, I’ve had multiple meetings with CEOs of suppliers of Apple, and they would say, “Why are we pushed to such slow margins?” And I’m like, “Well, you’re paying for it because you want access to the expertise and that’s what everybody wants.” Here’s my favorite statistic about Apple in China. So Apple controls about 35% of the smartphone market share in the world, but they take about 95% of the profit.

And why does that happen? It happens because they’re able to leverage their expertise to push suppliers to do what they want them to do. And then those suppliers go make their money from Xiaomi, Oppo, Vivo, everybody.