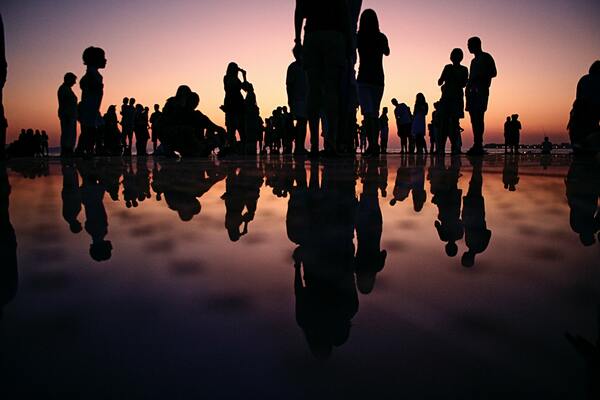 share
subscribe
https://lux-capital.webflow.io/ideas-blog/securities-by-lux-capital-atomistic-literacy
share and subscribe
https://lux-capital.webflow.io/ideas-blog/securities-by-lux-capital-atomistic-literacy
Danny Crichton
00:00
00:00
transcript
All our transcripts are made by human listeners and reviewed by our team for accuracy. Though we try hard to keep them error-free, there may be differences between the recorded audio and written transcripts. Please verify any statements in the audio before quoting in print.

It’s August, and along with the bronzing rays of sun come the inevitable schmoozing estival get-togethers. It’s a ritual that has come back in force after two years of small-group pandemic huddles in yards and on beaches, and this conviviality comes coupled with that most modern of games, what might be dubbed Cultural Minesweeper.

“Have you read Tomorrow, and Tomorrow, and Tomorrow?” “No, but have you read The Overstory?” “Oh, I’ve heard that’s good. Did you watch the Game of Thrones prequel?” “I gave up on HBO Max last year, but have you seen The Crown, what did you think?” “It won a lot of awards, it’s on my list. What did you think of Jordan Peele’s new movie Nope?” “I loved Get Out, I should see it.”

In a shattered cultural milieu, the ricochets can bounce back and forth for a strained period: my record is about 20 before I surrendered to the sweeping currents of ephemeral but quality content. Perhaps one of this century’s greatest delights is happening upon a party guest that has read, listened, watched, or thought about anything in common with one’s self.

One cause is that we have transitioned more of our consumption patterns to social media, hampering conversational citations. Even in 2022 (and let’s deduct the Trump Twitter years), no one references tweets, Facebook posts, or TikTok videos as part of a dinner party conversation. Occasionally, you will get asked about some “insanely funny” video, but its ephemerality means that it almost never lands well, nor does it offer status to the interrogator.

This pattern continues, with the United Kingdom’s media regulator noting:

Ofcom’s News consumption in the UK 2021/22 report shows that, for the first time, Instagram is the most popular news source among teenagers used by nearly three in ten in 2022 (29%). TikTok and YouTube follow closely behind, used by 28% of youngsters to follow news.

BBC One and BBC Two – historically the most popular news sources among teens – have been knocked off top spot down to fifth place. Around a quarter of teens (24%) use these channels for news in 2022, compared to nearly half (45%) just five years ago.

The more obvious cause is the deluge of content (see “Easternization of media” a few months ago for more), and to put it into precise terms, the inability of any cultural artifact to generate an audience. House of the Dragon, the new Game of Thrones prequel (a description I have to include for the precise reason that audiences are shattered!) garnered nearly 10 million domestic viewers for its debut last weekend. That’s the best series launch in HBO history, but a reminder of just how small audiences have become: even a lavishly funded production, building on the legacy of one of the most popular shows in history, barely receives glances from a percentage point or two of the viewing public.

What is to be done? Simon Evans, writing in The Critic, argues that it is time to just pretend to read books:

Now, as a life-long pseud, I learned years ago how to float in an implied familiarity with an author or their work, without telling an outright lie. I have a shell like a Galapagos Tortoise when challenged on this sort of thing. But I have noticed that such libertine manners are fast becoming normalised.

His sardonic view is to take that libertine manner and enjoy the libertine nature of modern society:

Don’t feel ashamed. The sad truth is that we are becoming an illiterate society. As a pastime, books are as dead as theatre was fifty years ago. What little reading we do now is rarely in longer form than you are currently struggling through — I wonder if you have already scrolled down to see how much more of this you need endure? Even when we do buy an actual book, the data is in on our chance of finishing it, and it’s not pretty.

I don’t agree that we are becoming an illiterate society, but we are dissolving a collective literacy into an atomistic model of independent thinking. The irony is that some of the most interesting people who do think and ponder many of the sublime works that our culture produces are stuck not talking with others. Perhaps religious sects have it figured out: an intentional canon read by all that forms the basis for all further discourse. Criticism is layered on a bedrock of culture, so there’s at least an agreed set of material being brought into contention.

A few months ago in “Consensus functions,” I wrote about the convergence and divergence of society when it comes to facts, theories and politics:

Culture is a form of consensus, collections of intellectual intangibles designed to connect each of us together. Our divergence of taste ultimately means a divergence of culture, and the increasing need to translate across impermeable barriers of media. There’s no translator for my taste I can bring to a dinner party, and alas, that means the game of Cultural Minesweeper begins again. Thank god everyone in Brooklyn over 30 watched The Wire.

Josh Wolfe has posted a full copy of our Q2 LP Letter (that’s a Google Drive link to the PDF), which sets out how Lux sees the current macroeconomic environment, our areas of investment interest, and our overarching belief that 2022 and 2023 are going to be extraordinarily enriching for founders and investors who are aggressively honest about the markets and can adjust their now-dead plans.

I’ll highlight in the letter a longer explanation of a new theme we have been incubating the past few quarters we’ve dubbed “extensionalism” (which you can read in the full letter starting on page 9). A brief intro:

Seventy-five years ago, a philosophy of ‘existentialism’ was born that emphasized the existence of the individual acting with free will. But increasingly, we depend not just on ourselves, but on extensions through the technology we make––technology, both observable and invisible. We call this theme “Extensionalism”: the extension and embodiment of our senses and cognition aided and offloaded onto technological systems with their own requisite nervous systems (sensors, solid-state memory and logic processors, along with actuators and end-effectors that act on computation and programs) and metabolic systems (energy processing and giving off waste-heat).

For those frightened at reading the whole letter, Josh has a lengthy tweet thread filled with highlights.

The sun is rising (again) on elemental energy

What a difference a year makes. In “Fission today, fusion tomorrow,” I talked about the resurgence of political interest in nuclear power and what’s blocking the transition to a more “elemental energy” approach. Since then, I briefly noted in “Intel’s Malaise” one of the most important about-faces on the issue from Germany’s Greens, which now endorse reopening soon-to-be-shuttered nuclear power plants in the heart of Europe.

This week, an even larger about-face — let’s call it a volte-face — was announced.

Japan, which turned its back on nuclear power in the wake of the devastating 2011 Fukushima Daiichi plant accident, is looking to rebound on nuclear energy. Secure in (political) power for the time being following upper House of Councillors elections in July, Prime Minister Fumio Kishidaannounced that the LDP-led government would begin reopening shuttered plants and actually begin construction on new ones.

Japan, like many countries this summer, has been buffeted by huge swings in oil and gas prices, placing acute attention on the country’s high demand for energy imports. Elemental energy isn’t an immediate salve, but it is a critical component of a long-term, sustainable, and clean energy strategy.

Flowing from one person’s idea into Adam Neumann’s head

How much should a VC wager on an entrepreneur whose company once hit a valuation of $47 billion? And that even today is still worth $3.69 billion on the public markets? My guess is that the popular reputation and the underlying truth are actually quite divergent, and the typical investor undervalues the fallen entrepreneur. There’s potential alpha sitting right there on the table.

That last line triggered a minor tidal wave of email responses from readers, who complained that there was no world in which Neumann should be backed again. One reader cited Warren Buffett’s aphorism “You can’t make a good deal with a bad person.”

Fair enough. Well, it didn’t take long for Neumann’s truth and perception to get rocked again. The Forbes trio of Iain Martin, Alex Konrad and Cyrus Farivar reported this week that Neumann might have filched the idea for Flow from an angel investment in Alfred, where his financial office had two representatives on the board. The evidence is fairly damning, and begs the renewed question: how much is that alpha sitting right there on the table worth, really?