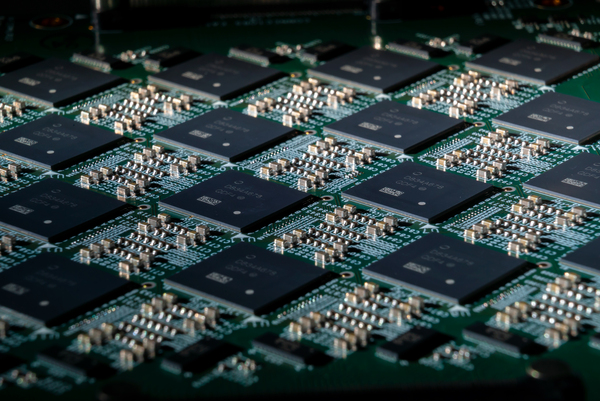 share
subscribe
https://lux-capital.webflow.io/ideas-blog/securities-by-lux-capital-intels-malaise
share and subscribe
https://lux-capital.webflow.io/ideas-blog/securities-by-lux-capital-intels-malaise
Danny Crichton
00:00
00:00
transcript
All our transcripts are made by human listeners and reviewed by our team for accuracy. Though we try hard to keep them error-free, there may be differences between the recorded audio and written transcripts. Please verify any statements in the audio before quoting in print.

After millions of dollars of lobbying, the American semiconductor industry received billions of dollars of bailouts commitments with the Congressional passage of the Chips and Science Act to reshore fab capacity back from Asia. The bill’s last-minute surprise passage before the August recess brings industrial policy to the heart of American economic strategy after decades in the wilderness.

For reigning chip leader Intel, how did the sudden passage of the bill affect its valuation? Well, it plunged, because on the very day that the House sent the text to President Joe Biden for his signature, Intel announced perilously bad Q2 earnings, with an EPS of 29 cents compared to an analyst consensus of 69 cents. The chipmaker also experienced its first net accounting loss in 30 years, and cut revenue guidance for the rest of the year to boot.

Intel argued that it took one-off impairment charges and that its buyers went through a rare inventory reset. $559 Million of those impairment charges came from the company’s announcement that it would shutter its Optane memory business, which as Paul Alcorn at Tom’s Hardware summarized:

[Intel CEO Pat Gelsinger] said this marks the sixth non-core business Intel has sold since his arrival, including the recent sale of its drone business to Elon Musk’s brother along with the sale of the SSD storage unit to SK hynix, generating $1.5 billion for investment in areas that are core to Intel’s business.

Ironically, the company’s sputtering financial performance is forcing it to buttress its stock dividend with cuts to its capital investment in fabs … the very fabs that Congress just funded to save. As Dylan Patel writes in the SemiAnalysis newsletter:

Intel paid a quarterly dividend of $1.5 billion in Q2, they expect to pay that much or more for Q3 and Q4 of 2022. That is a minimum of $4.5 billion dollars paid in dividends. Compare that to the $4 billion reduction in capital expenditures which are mostly related to building fabs. Intel will try to waffle about gross vs net capex, but their direct spending is being reduced.

That leads him to a conclusion I mostly agree with:

This attitude by American executives is exactly why the US will lose in the semiconductor industry. Moves like the CHIPS Act only band-aids to the problem and do not structurally change the policy issues in the US.

Patel is stridently pissed in his post, but I am more equanimous. For decades, the U.S. has avoided a broad-scale, government-directed industrial policy, an approach widely used by countries in Europe and Asia, particularly in manufacturing. America’s first forays into industrial policy are going to experience fits and starts, and it’s possible — perhaps even likely — that the $55 billion of cash showered on semiconductors will rinse right down the drain into the sewers (or the pockets of shareholders). Trying and failing is the only way America will learn how to strategize and salvage its industrial base.

On a more positive front, the Chips and Science Act is replete with endless new titles and authorizations for funding. The Senate Committee on Commerce, Science, and Transportation posted a 39-page summary document walking through the monster bill, which includes authorizing new funding for programs at the National Science Foundation, the Department of Energy, NASA, the National Institute of Science and Technology and more.

Oh, and also new funding for the security of the Supreme Court, because this is Congress and passing more than one bill per year is ambitious.

The funding authorizations are fantastic, but less so is Congress’s growing penchant for directing research funding in excruciatingly specific ways.

For instance, the bill authorizes $50 million per year for five years on fusion research, offers tens of millions of dollars and “authorizes the establishment of at least two national teams to develop conceptual designs and technology roadmaps for a pilot fusion plant” (why two?) and “directs the construction of the Material Plasma Exposure Experiment,” which studies “the way plasma will interact long term with the components of future fusion reactors”. There are hundreds of such directed provisions in the bill.

Such program details encoded into law forces research agendas to fit into the small niches of Congress’s fancies. Scientists can’t just strike out into the endless frontier for the best paths to new knowledge, but must instead seek out the shortcuts to the lobbyists who inserted these specific provisions. It disempowers scientists to select the most worthy fields to explore, ultimately retarding American scientific progress.

Last week in “Uncertain Risk”, I wrote that:

One of the annoying and undying narratives of American foreign policy is that there will be some technology barrier that China won’t be able to master. The barrier always seems to shift, and recently it’s been focused on the mainland’s ability to fab chips at and below the 14 nm node as well as to make an airframe that can compete with Boeing and Airbus.

I noted China’s progress on chips last week, and this week, it made progress on the airframe. The C919 from Commercial Aircraft Corp of China is nearing certification, and its first launch customer will be appropriately enough China Eastern Airlines. The plane competes with the Boeing 737 MAX, which still somehow receives orders (including a new 100 plane order from Delta). While the plane’s parts are heavily sourced from overseas manufacturers, it’s inevitable that China will continue to make strides to indigenize the complete aircraft supply chain.

Meanwhile in other air news, South Korea successfully tested its indigenous KF-21 Boramae supersonic fighter jet, becoming one of a small number of countries which can manufacture such planes. As CNN reported, “The KF-21 is a joint project between South Korea and Indonesia in which Seoul holds 80% of shares.” New data showed that South Korea is now on track to be the third largest arms exporter in the world, with exports tripling over the previous five years.

Why? Because of defense acquisition deals like this week’s $7.6 billion purchase from Poland, which will include “48 FA-50 light combat fighter jets, 180 K2 Black Panther tanks and an unspecified number of K9 howitzers from Korea.” For middle-income countries like Poland, the cost efficiency of Korean defense technology compared to the American defense industry’s offerings are incredibly enticing.

Finally, while we are in the China orbit, I want to highlight one well-reported story earlier this week on security issues with the mainland. Katie Bo Lillisat CNN has a deeply-reported story about the FBI’s investigation into Huawei:

Among the most alarming things the FBI uncovered pertains to Chinese-made Huawei equipment atop cell towers near US military bases in the rural Midwest. According to multiple sources familiar with the matter, the FBI determined the equipment was capable of capturing and disrupting highly restricted Defense Departmentcommunications, including those used by US Strategic Command, which oversees the country’s nuclear weapons.

It’s a story filled to the brim with fascinating espionage and counter-espionage activities.

Josh Wolfe has been promoting elemental energy, and now renewed attention is being placed on the potential for nuclear energy.

German policymakers, stymied by a collapse in the country’s export economy and the coming natural gas needs of winter, are now reconsidering the country’s decision to cut future nuclear expansion and shutter all of its nuclear power plants. The Financial Times reported that:

A person close to the Greens leadership said the party had come to the conclusion that “all options should be on the table” in the event of an energy crunch. One of those options might be to extend the life of the Isar 2 nuclear station in Bavaria beyond its shutdown date of December 31.

The Greens, which have campaigned for years on an anti-nuclear platform, now find themselves confronting reality, where the choice isn’t a hypothetical energy utopia, but rather the cold, brutal tradeoffs of geopolitical logic. If only they could have come to the obvious and reasonable “all options” approach a bit earlier.

We often talk about security here in “Securities,” and this week, Lux funded two startups that are working on bringing two different types of security to people everywhere.

First, we led a $7 million seed round into Amsterdam-based Vosbor, which is digitalizing agricultural commodities trading. As Peter Hébert wrote in our investment note:

Vosbor is bringing the physical agricultural commodities markets online, to better manage risk and commodity flows in a world where supply chain and climate risks are ever increasing. The company is also unveiling its flagship trading platform, which allows buyers and sellers to connect, communicate and trade corn, wheat, soybean, palm oil and 14 other agricultural commodities in a transparent and secure environment. The platform is currently being piloted by 35 of the leading global commodity trading firms and food manufacturers.

Industry heavyweights Chris Mahoney, former CEO of Glencore Agriculture, and Soren Schroder, former CEO of Bunge, are both investing and joining the company’s board.

Second, we co-led the $7.5 million seed round into Summer Health, a service that allows parents and caregivers to easily text pediatric-care physicians and get care within 15 minutes, all for a low monthly fee. As Deena Shakir wrote in our investment note:

Unfortunately, getting care today can be astonishingly stressful — not to mention time-consuming and costly. The average American waits two weeks to meet with a primary-care physician, and Covid-19 exacerbated these dynamics, increasing some wait times by more than 100%. That’s partly because doctors are leaving the profession at record levels (1 in 5, with higher rates of dropouts from women, and reportedly also higher in pediatrics). The system is not serving patients or providers, both groups of which are burnt out from years under extreme pressure. Caregiving also historically puts an outsized burden on women, which has downstream economic implications on families and our broader economy.

No one is served well by the current system: not parents, not children, not doctors, and not clinics. Everyone is multi-tasking, and yet, pediatric care remains mired in age-old processes that require parents to take time off from work and doctors to take overtime to cover all the needs of our children today. One in four parents will take their children to urgent care in a given year, with costs that can quickly add up to hundreds (and often thousands) of dollars a year, not accounting for lost wages and time.

There’s a better way to serve parents and providers collectively, and that’s exactly the service Summer Health is building.

Food security + health security, all in one week. Chaos may be the dominant theme of 2022, but Lux remains as focused as ever on finding hard science and digital solutions to the toughest problems facing humanity today.

Our producer Chris Gates and I talked about previous “Securities” newsletters “Dissonant Loops” and “Scientific Sublime” in a new podcast we entitled “Maybe the world is effing amazing and I am just reading the wrong things.” These were the most negative and most positive newsletters I’ve written so far this year, and we talk about why 2022 seems to be defined by a dichotomy between potential and disappointment.

In the same way that monocropping corn creates weaker, less resilient land, monocropping our streets with cars creates cities that aren’t as vibrant as they ought to be. We often don’t notice it, because we’ve trained ourselves to think of streets as “almost exclusively for cars”. But if you think of all the things you could do with streets, you realize how weird it is that we have, for decades now, used them mostly only for vehicles.