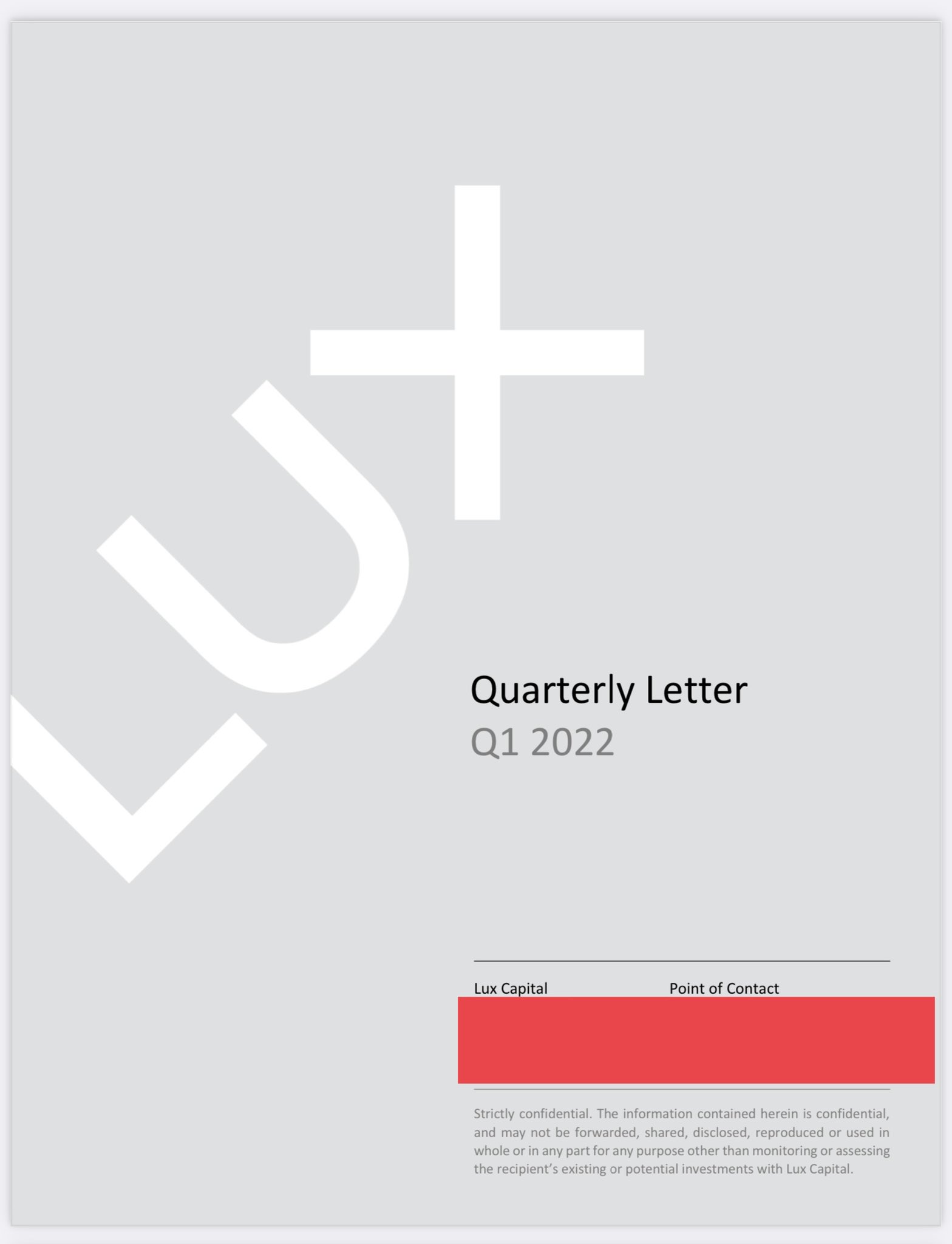 share
subscribe
https://lux-capital.webflow.io/ideas-blog/securities-by-lux-capital-multiple-valuations-syndrome
share and subscribe
https://lux-capital.webflow.io/ideas-blog/securities-by-lux-capital-multiple-valuations-syndrome
Danny Crichton
00:00
00:00
transcript
All our transcripts are made by human listeners and reviewed by our team for accuracy. Though we try hard to keep them error-free, there may be differences between the recorded audio and written transcripts. Please verify any statements in the audio before quoting in print.

First up before the main story, Josh Wolfe has published some excerpts from our latest LP quarterly letter on Twitter. It was lengthy given the chaos of the markets and the sheer amount of macro changes transpiring right now, but it’s a cohesive story centered around a theme he dubbed “entropic apex” — “a moment of maximum instability and imbalance where things are easily torn apart or fall to pieces.”

In past letters, we have emphasized to founders the importance of raising capital and then immediately husbanding it, in preparation for an inevitable down cycle. Well, the down cycle has arrived, and so our advice for startup founders and fellow GPs has adapted as well. Our line today is to be thoughtfully defensive but aggressively opportunistic — we expect to see a wealth of opportunities arrive for founders to expand products and to grow revenue through M&A rollups, to buy intellectual property at uniquely low prices, and to grow companies creatively that take advantage of the eddies in that great ocean of capital.

Due to confidentiality, we can’t release the whole letter in its entirety (or at least, not yet as it goes through review), but the public excerpts are a good overview of how we see the market and what we believe will happen next.

Anyone who has followed the markets the past few months has had to come to terms with a simple notion: the markets have no idea what anything is worth right now.

Just this past week, Walmart and Target had their worst one-day stock performances in more than three decades as weaker than expected consumer purchasing led to ominous warnings from both companies on future revenue growth and profitability. Given their focus on consumer staples, those warnings scared investors, with markets experiencing one of their worst single-day performances since the early stages of the Covid-19 pandemic.

What’s strange though is that all of this should have been foreseen. Credit card data is widely monitored by hedge funds and other investors for signals about consumer spending. The results from major retailers should come as a surprise to no one, and yet, we see a sudden drop in share prices on news that should be well-known.

Meanwhile, we have seen wild swings of valuations in tech stocks as well. Coinbase seems to double only to halve a few days later, a level of volatility that belies the fact that its revenues are public to any sophisticated investor who bothers to aggregate transaction data from Bitcoin, Ethereum and a few other critical chains. We see this volatility across tech stocks from new IPOs to Big Tech itself.

As much as the macro environment is complicated, the news each day is typically not all that surprising. Why such chaos? Why such massive swings?

One answer is that valuations have become mercurial. Or put another way, what something is valued is dependent on who is asking and even whenthey are asking, in what might be dubbed Multiple Valuations Syndrome.

Take two standard assets: a house and the equity of a startup. These assets theoretically have a single “correct” valuation, a price that the asset is worth given the demand from the market. These valuations can be calculated by comparisons to similar assets (comps) and also by just testing the market and seeing what price it will bear. You can put the house on the market, see who throws in an offer, and choose not to sell. Similarly, a founder can fundraise, see what term sheets arrive, and get an accurate sense of the market price for their company.

What’s happening now is that those valuations are shattering into more and more numbers in order to accommodate ever more diverse parties.

Take a hypothetical startup that recently raised a high-priced growth round that is now staring into the abyss that is public comps. Some VCs mark to market, and have already reduced the value of the company. Other VCs, perhaps dependent on raising a new fund soon, hesitate and keep the valuation at the last round price, or even tweak it higher. They may even do an inside extension round in order to prove that the company is still valued at that last round price. Meanwhile, debt providers do their own revenue and operations underwriting, and determine a different valuation from all of the above. And then there is the value negotiated in the 409A process, and also the valuation that is offered to employees to keep morale high.

What was once a relatively coherent valuation — one communicated in press releases and TechCrunch articles — is now opaque. Founders now demure from talking valuations, not just because of the shame of mentioning a decline, but also because they just don’t know how to answer the question anymore.

As time goes on unfortunately, that dissonance actually gets worse instead of better. Valuation “stickiness” — the phenomenon of an asset price that doesn’t adjust to new market conditions — becomes a huge driver of new complexities.

We often see this phenomenon in housing, where nearby sales comps drive valuations. If no one sells though, valuations can’t settle to a new market normal — the exact same pattern in startup equity these days. Insiders are using extension rounds to delay the valuation reckoning and avoid triggering ratchets and down round protections. Valuations are driven by data, and without that data, they can’t be recalculated.

The truth of course is that those valuations are already being recalculated and adjusted by different parties. And so we get the Multiple Valuations Syndrome of startup equity (and pretty much all assets right now).

As these valuations diverge, startup equity becomes more and more of a Veblen good — a good valued for what it is priced, or in other words, a luxury good. A startup is worth $5 billion because it is worth $5 billion, just as a $550 Louis Vuitton t-shirt is valued far above its utility or materials as a garment. Maintaining the image of premium becomes more important than the quality of the business itself.

This dynamic has huge negative social implications. When markets can’t cohere on a valuation, capital gets misallocated — or not allocated at all as investors hold back waiting for a clearer signal. I’m already seeing this phenomenon occasionally in our own partner meetings, where some founders stop by to present and somehow still put on a brave face upon asking for a valuation that is wildly out of sync with the market today. They have to keep that premium brand value.

We need a reset to move forward — a reset of valuations, a reset of expectations and a general recalculation of what all assets are worth given the present state of the economy. Past valuations are now irrelevant, and exist in a bubbly fugue that ended about six months ago. We need to forget that period and focus on the present, because that is the only valuation that matters. We need to unstuck these numbers.

A reset will cause acute pain immediately, but the benefits long term are legion. Yes, the collective write-offs will be massive, but then the market will be functional once again, with valuations that align with present thinking.

It’s a collective action problem though, since who will step forward first to reset their valuation? Today, it’s basically whoever absolutely must. The trickle of recapitalizations and down rounds though won’t stop, even for companies that survived the first few months of the hurdle. The reality of the markets will eventually catch up with everyone.

Multiple Valuations Syndrome is not healthy. It prevents markets from working correctly and efficiently, and ultimately, the lack of coherence is just plain wrong — all these different valuations for different people don’t actually add up. The faster we readjust and cohere prices, the faster that the tech markets can start growing again.

New “Securities” Podcasts: Tony Fadell on Product Design and Josh Wolfe on Everything Else

Two great new episodes this week on the “Securities” podcast.

First, Peter Hébert and I chatted with legendary product leader Tony Fadell about his new book Build: An Unorthodox Guide to Making Things Worth Making, covering such topics as how to lead inside companies, when to walk out the door, the importance of product marketers, and why he thinks the metaverse is not worth entering. Listen here:

Second, Josh Wolfe and I talked about the wild week of news from Elon Musk and Twitter to South Korea’s growing penchant for nuclear weapons. We also discussed a bit about how the Lux quarterly LP letter came together. Listen here: