"Securities" by Lux Capital: "We’re going to try to stop him" 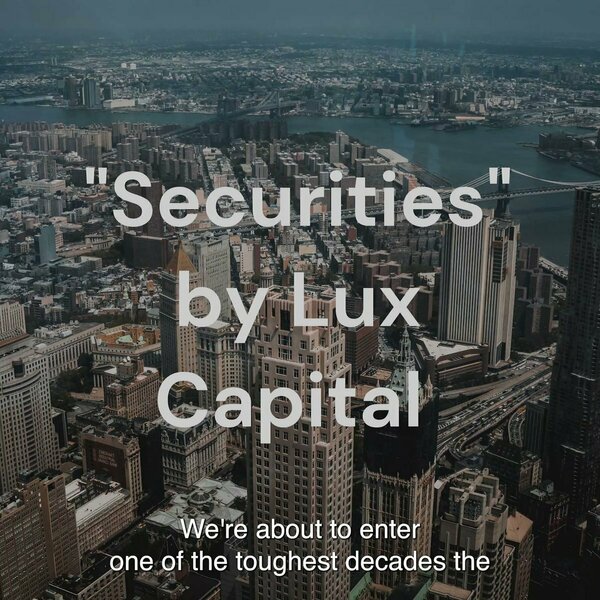 share
subscribe
https://lux-capital.webflow.io/ideas-blog/securities-by-lux-capital-were-going-to-try-to-stop-him
share and subscribe
https://lux-capital.webflow.io/ideas-blog/securities-by-lux-capital-were-going-to-try-to-stop-him
Danny Crichton
00:00
00:00
transcript
All our transcripts are made by human listeners and reviewed by our team for accuracy. Though we try hard to keep them error-free, there may be differences between the recorded audio and written transcripts. Please verify any statements in the audio before quoting in print.

I’m thrilled to announce that we’ve launched — in beta, if you will — our new “Securities” podcast. The series will cover the same topics as we do in the newsletter — science, technology, finance and the human condition. In our first week here as we quite literally unpack boxes of equipment, we published two episodes:

Listen in, subscribe, and tell me and our new producer Chris Gates how we’re doing!

“We’re going to try to stop him”

The news media has extensively covered the cyberhacking gang Lapsus$this week, following the group’s successful data extraction hack of Okta, the single-sign-on platform for corporate apps, as well as hacks at Microsoft and an extensive extortion scheme against Nvidia. U.K. police have now arrested seven members of the gang, disclosing that the age of the hackers ranged from 16 to 21. The head of the group was reported by the BBC and Bloomberg to be the youngest in that range. From BBC:

The boy’s father told the BBC: “I had never heard about any of this until recently. He’s never talked about any hacking, but he is very good on computers and spends a lot of time on the computer. I always thought he was playing games.”

“We’re going to try to stop him from going on computers.”

That always seems to be society’s answer to talent, and particularly technical talent — “We’re going to try to stop him.”

As I was thinking about the ages of these voguish hackers, I was reminded of the pipeline challenges for research scientists looking to build their careers, a topic that our scientist-in-residence Sam Arbesman has focused on. Mike Lauer, writing for the National Institutes of Health grant news service Nexus, compiled data showing the age at which an American research scientist receives their first “R01” grant, the NIH’s workhorse for funding projects. Median ages have increased from 38 years old for a first grant in 1995 to now 42 years old in 2020, with men and women following almost identical trendlines.

In other words, scientists need to wait about two decades after their bachelor’s degree on average to receive funding to conduct independent work (otherwise known as “doing science” or “doing their job”).

Not even the most exceptional people within this already talented group fare much better. The 10th percentile of youngest male scientists getting their first grant was 33 years old in 1995 and aged to 36 in 2020, and again, a similar pattern holds for women. If you’re brilliant and ambitious, you might shave a few years off the pipeline march, but not much more.

We are seeing many institutions age. As just one stylized example, Congress is the oldest it has been in 20 years, with the average congressman now aged 58 years, up from 54 two decades ago. Senators on average are 64 years old, up from 59. We’re seeing a similar pattern in business. The ages of newly-hired CEOs of S&P 500 and Fortune 500 companies have risen from 46 years old in 2005 to 57 years old in 2019, and only dipping a bit during the recession according to an analysis by executive search firm Crist Kolder Associates. That’s a jump of 11 years of age in 15 years. Put another way, essentially the same age group in 2005 were still being selected for executive roles more than a decade later.

The causes of this institutional aging are diverse — and hard to provably pin down — but my view is that it comes down to competition and conservatism. Competition for leadership roles across much of the knowledge economy has become more acute. The number of NIH-backed scientists has been flat for more than two decades, even as more people become scientists. The number of S&P 500 CEO roles is quite fixed (although technically co-CEO roles occasionally crop up so it isn’t always an even 500), and the size of Congress has been fixed for some time now. Just with population growth alone, there would be more competition. When you further layer in greater numbers of college graduates and a deeper pipeline of talent, there are more people competing for a flat or declining number of executive positions.

That competition leads right into the conservatism of modern institutions. When an institution has so many options to choose from, it’s hard to boldly choose an unconventional candidate when a more experienced candidate is available, a pattern that trickles down from elite executive positions all the way to entry-level roles.

It’s almost as if every institution is saying “We’re going to try to stop him” (or her). We’re going to protect ourselves from any brilliant ideas or new insights. We don’t want that spastic, bountiful, naive energy that might force change, or hire someone who might just be ornery since the Kafkaesque organizations we have built can be shredded apart by any bright teenager.

Returning to the leader of Lapsus$: here’s a teenager with an incredible talent for computers who has unfortunately used those skills for extortion, acquiring an alleged $14 million of ill-gotten goods. What could we have done as a society — across all of our institutions — to direct that incredible energy and talent to something productive and socially beneficial?

Understandably, youthful energy is directed to where it can find purchase, namely computers, hacking, crypto, startups and other entrepreneurial areas where age is less of a factor in advancement than talent and experience. Much of the anti-institutionalism of crypto comes less from libertarianism or anti-statism in my view and much more plainly from the high walls these institutions erect against newcomers. If you’re not going to be able to evolve banking until three decades into your career, but you can do so via a blockchain startup in three years, which option would you rightly pick?

One of the most persistent themes across “Securities” is that many of our institutions are in a weakened state. Democratic systems are under threat, research laboratories have become stale, American industrial companies are losing their edge. What’s most pernicious is that it’s precisely the group of people who could most renew these institutions who have the least access and agency to do so.

The pressure will only intensify. As I wrote in TechCrunch in late 2020, the no-code generation is arriving. Empowered by platforms like Roblox and Minecraft, kids growing up today are learning digital skills and coding at earlier ages and with greater facility than ever before. If I am optimistic about anything, it is that the next generation is going to have an incredible wealth of talent to use technology to change the world.

The question is where their enthusiasm and energy will be directed. On one side is Lapsus$ and extorting Nvidia to force the company to make its chips faster for blockchain hashing. The alternative is harnessing that breathtaking talent for remaking the frontiers of science: building fusion reactors, developing quantum computing, overhauling our understanding of genetics and medicine, and eviscerating our current nostrums with better science. Our institutions shouldn’t be dams trying to hold back the rising tide of smart ideas and smart people. Instead, we need to open the floodgates, and tap those raging rapids right through to the future.

I was at Wharton at the University of Pennsylvania this past week to debate the merits of universal basic income, the idea that most welfare programs could be replaced with a single equal income grant to every citizen. I was in charge of the “opposed” viewpoint, which frankly, is the easier side to argue given the number of points against UBI, from its gargantuan economic scale to the assumed deleterious cultural changes it would trigger.

But I focused on one line of attack that doesn’t get enough focus, and that was around catastrophic risks. Our world is filled with disasters that can befall us. A sudden heart attack or medical issue can quickly cost millions of dollars in the United States for treatment. A hurricane or wildfire can instantly wipe out our entire wealth in the form of our home and property. A workplace injury or a mental health episode can suddenly mean that we lose the ability to work and make the income we need for our families.

Most anti-poverty programs (and arguably all of them) can be thought of as publicly-funded insurance. When someone has an injury or a sudden medical emergency, it’s unpredictable, but generally rare. So we insure against these issues with our large-scale health insurance programs like Medicare and Medicaid, which together produce the largest plurality of welfare spending in the United States. Similarly, Federal Flood Insurance offers subsidized insurance for homeowners stricken by floods.

The goal of most welfare isn’t to help all people all the time, but rather to substantially and rapidly help some people some of the time. It’s meant to reduce the chaos and bad luck of our complex society, and give everyone a more stable footing by which to independently manage their jobs and lives.

UBI doesn’t solve for catastrophe. Far from eliminating most welfare programs, everyone will still need a full set of catastrophic insurance policies to cover them just as they did before. It’s a flow rate attempting to handle surges — and that’s a recipe for disaster for everyone.